WAYS YOU CAN SUPPORT 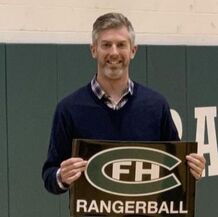 Coach Carhart is entering his 5th season as head coach at FHC. Since returning to Rangerball in the summer of 2018, Carhart has led the rangers to an OK-White championship in 2020 and a 53-27 overall record. Carhart has deep ties to Rangerball - a 2002 graduate, he was a standout guard for some of the original Rangerball teams under former coach Ken George. His teams went a combined 39-8 during his junior and senior seasons, winning league, district, and regional championships in 2002. After graduation, he went on to have a successful career at Grand Valley State University and played 2 seasons of professional basketball overseas. Prior to returning to FHC, Carhart coached Lowell from 2011 to 2016. He guided the Red Arrows to their most successful season in nearly 40 years in 2015-2016 when Lowell finished 18-6, which was the program's most victories since 1977-1978.

He teaches a variety of social studies courses at FHC. Carhart and his wife, Sadie, have three children: Eila, Ruby, and Koda. 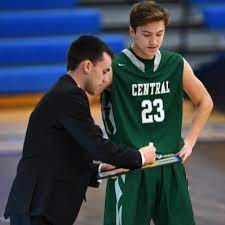 Coach George is entering his 2nd season as varsity assistant coach, and his 4th overall season as part of the Rangerball coaching staff. Prior to this past season, George was the Junior Varsity head coach for 2 years. During his 2 years as JV coach, George's teams earned a combined 34-5 record and won back-to-back conference championships. In his role on the varsity staff, he works mainly with the offense and coordinates opponent scouting reports. Prior to returning to Rangerball, George spent 2 seasons as a student assistant coach at Hope College under head coach Greg Mitchell. During his time on staff at Hope, the Dutchmen won 2 conference championships. George has deep ties to Rangerball - he graduated from FHC in 2016 and is the son of longtime coach Ken George. At FHC, he was a member of one of the best teams in school history - the 2015 team that finished 23-1 and won conference and district championships. 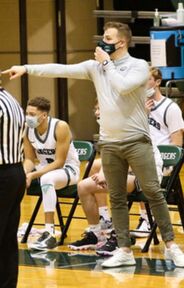 Coach Tilden is entering his 2nd season as JV head coach, and his 3rd overall season as part of the Rangerball coaching staff. Prior to being named JV coach, Tilden served as a varsity assistant for 1 year. During his first season as JV head coach, the team went 18-2 and won the OK White championship. Prior to coming to FHC, Tilden played for the JV team at Hope College and eventually transitioned into a student assistant role under head coach Greg Mitchell. He graduated from Zeeland East High School in 2015 and was a 2-time all conference player and 3-year starter. Tilden is also in his 2nd season coaching for the West Michigan Lakers AAU program.